Trending
You are at:Home»Member News»CG Robinson takes delivery of the first HX210A Hyundai crawler excavator in the UK
By Louise Carney on September 14, 2021 Member News
Hyundai Construction Equipment Europe has recently added a new 20-tonne class excavator into the range – the HX210A – the first of which has been sold by Cumbria-based Hyundai dealer, Taylor and Braithwaite to Darlington based contractors C G Robinson.
CG Robinson is a nationally recognised family-run business with over 30 years of experience,  the company specialise in plant hire and sales, agricultural, ground care and maintenance and even offers motorhome and welfare van rental!
The company runs a mixed fleet of excavators which already includes a number of Hyundai machines in the popular 8 and 14-tonne categories. Already familiar with the Hyundai’s reliability and performance, the company was quick to add the first UK-based HX210A into its large fleet. 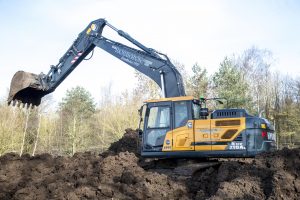 The HX210A is a slimmed-down version of the HX220A – the Hyundai designers have reduced the upper structure’s overall width by 240mm. There is also a 40mm reduction in the rear overhang, which enhances stability and is suitable for working on confined construction sites and also working by the side of the road or motorway project.
The launch of the HX210A isn’t seen by Hyundai as a replacement to the popular HX220A model but it is seen as a machine aimed towards the general hire market. This particular weight range is the most popular in Europe with 1 in 5 excavators sold landing in this category.
Hyundai wanted to make the HX210A simpler and easier to work with and also make it more cost-effective to run.  Ian Burton, MD at Taylor and Braithwaite explained. “Where the HX220A is powered by a Cummins B6.7 engine at Stage 5, the HX210A has a B4.5 unit, also meeting Stage 5 regulations. The smaller engine carries Cummins’ innovative all-in-one exhaust after-treatment package which reduces emissions but also reduces maintenance time and costs. The smaller engine also does away with the requirement for EGR again, this offers a cost-saving when it comes to maintenance, increases fuel economy and also increases service intervals.”
Reduced fuel consumption is aided by a new EPFC (Electronic Pump Fuel Control) system which improves the fine control of the excavator and also allows the operator to tailor the machine for the job they are undertaking. The full colour monitor in the cab will show the operator real-time and average fuel consumption figures allowing them to alter their operating style to achieve the best fuel figures. Hyundai claims the smaller engine can reduce daily fuel burn figures by up to 24% over the 6-cylinder HX220X model without EPFC.
Ian concluded, “The HX210A is an ideal solution for those wanting a more fuel-efficient and lower-cost excavator and as a hire market machine, Hyundai has hit the spot. It’s a tough machine that can do exactly what someone will buy it for, move earth, and it will do it very well indeed!”
The HX210A is currently working on hire to a large residential development in Stockton on Tees. The 20-tonner was drafted in to move a large volume of stockpiled soil, which had not been sealed, therefore was very wet heavy and dense!  “It had its work cut out and it did so without complaint” confirmed experienced operator, Ray Wallace.
Share. Twitter Facebook Google+ Pinterest LinkedIn Tumblr Email
Previous ArticleYour contributions needed for a new Tailings Management Brochure
Next Article Create your vision with the new Hitachi Zaxis-7 wheeled excavator range