PCSO Tom Vaughan is the latest winner of the prestigious CESAR award and is the very first officer to receive TWO CESAR Champion badges for identifying a piece of stolen construction plant and an agricultural machine on consecutive days. 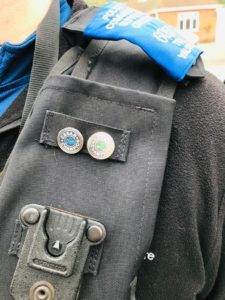 PCSO Vaughan attended the launch of the Leicestershire Police Rural Crime Strategy in June, where the CESAR technology was demonstrated.  PCSO Vaughan was so impressed with the ease with which machines could be identified using CESAR that he emailed his colleagues to ask them to keep an eye out for the distinctive CESAR triangle when on patrol.

When a member of the public phoned in to report a suspicious piece of plant, the call was diverted to PCSO Vaughan, who made a quick call to Datatag to confirm that the machine was stolen.  24 hours later, a similar call was received and PCSO was again on hand to make the call and identify a piece of stolen agricultural machinery.

PCSO Vaughan is thrilled with the awards saying “It was really satisfying to be able to put my CESAR training into action and get such a great result. To have two recoveries using the system on consecutive days makes it all the better.  This demonstrates how easy it is to read the numbers on the triangle, make the call to Datatag and find out the provenance of a machine”’

The CEA’s Head of Special Projects, Dave Luscombe, was on hand to present the two awards to PC Vaughan, “It is great to recognise the work that our police force is doing to fight machinery theft across the UK through the CESAR Champion Awards. PC Vaughan shows just how quick and easy it is to use CESAR to identify stolen machinery.”

CESAR, powered by Datatag, can be fitted to any construction or agriculture machine that is at risk of theft. The tamper-evident label acts as an initial deterrent and the multiple layers of technology help to identify the machine. All the owner and machine details are stored on the CESAR secure database for police to double-check any machine quickly and easily. For more information visit  https://www.cesarscheme.org/index.php