Trending
You are at:Home»General News»UK Construction equipment sales were more than 70% above 2020 levels in the first half of the year
By Louise Carney on July 27, 2021 General News
Retail sales of construction and earthmoving equipment showed further strong growth in June and were 75% ahead of the levels seen in the same month last year when sales were still recovering from the impact of the first lockdown. As a result, sales in Q2 were more than double the levels seen last year and reached over 10,000 units during the quarter. For the first half of the year, sales were over 18,000 units, and are 73% ahead of the levels seen in the first half of last year.
Comparisons with sales in earlier years indicate how buoyant the market has been in 2021, with sales are ahead of both 2018 (by 4%) and 2019 (+7%) in the first half of the year. Like many other industries, the sector is still experiencing supply chain shortages and price rises for many products and materials. High levels of equipment sales in the face of this demonstrate the underlying strength of current demand in the construction market.
The pattern of sales for the major equipment types in the first half of the year is shown in chart 2 below. This shows that the strongest growth in sales has been experienced by Telehandlers (for the construction industry), with sales more than double last year’s levels in the first six months. This is a welcome bounce back after showing the weakest performance amongst the major equipment types in 2020 when sales were over 40% below 2019 levels. Mini/Midi excavators (up to 10 tonnes) have had the opposite experience, after being the strongest performing product last year. Sales in the first six months of this year have shown 58% growth compared with last year, and lag behind all the other major equipment types in % growth terms. However, Mini/midi excavators remain the most popular equipment type by a significant margin. 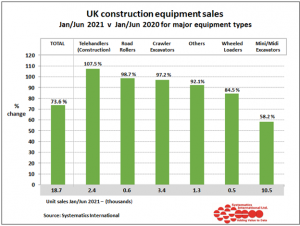 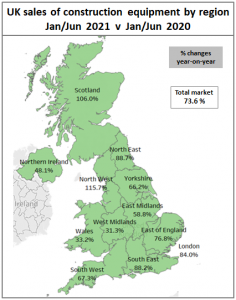 Sales in the Republic of Ireland are also recorded in the statistics scheme, and like the UK, showed further strong growth in June. As a result, sales in Q2 were more than double last year’s levels, and in the first half of the year are 56% above sales in the same period last year.
* The construction equipment statistics exchange is run by Systematics International Ltd. This scheme is run in partnership with the Construction Equipment Association (CEA), the UK trade association.
Share. Twitter Facebook Google+ Pinterest LinkedIn Tumblr Email
Previous ArticleIntroducing a fresh new look for GKD Technologies
Next Article Vehicle examiner, Peter Wilson, joins the Datatag Police Liaison Team