Trending
You are at:Home»Member News»Cummins – from Darlington to Korea!
By Louise Carney on May 23, 2022 Member News

Cummins has announced that its Darlington Engine Plant’s 1.5 millionth Mid-Range engine has made it across the globe to South Korea and been installed into a Hyundai excavator.

In January, Cummins revealed that it had manufactured its 1.5 millionth Mid-Range engine, a B5.9, at its Darlington factory in the north-east of England. Since then, the team at Darlington has been tracking the progress of its now ‘famous’ engine and have estimated that it travelled over 5,400 miles from Darlington to machine plant at Ulsan City, South Korea. 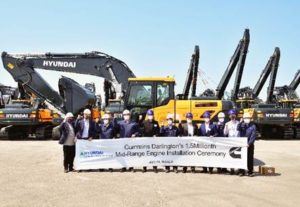 The 5.9 litre engine has been fitted into a 22-ton HX220S Hyundai excavator, providing the power for thousands of hours of heavy workload. This is not the end of the 1.5 millionth engine’s journey as the excavator is destined for a customer in Guatemala at the end of May.

Craig Thomas, Cummins’ Darlington Engine Plant Manager, said: “It is fantastic to be able to follow the journey of the 1.5 millionth engine since it left Darlington. This milestone is a great achievement for Cummins, and we are pleased to be able to share it with HCE, our business partners of over 30 years. The distance that this B5.9 engine has travelled truly reflects the global nature of our business, supplying products to customers in over 50 countries directly from Darlington.”

KS Yang, Hyundai Purchasing/Exe.VP, said: “Hyundai would like to congratulate Darlington Engine Plant on this milestone on the production of the 1.5 millionth mid-range engine and we are delighted to receive the engine for use in a Hyundai excavator. We look forward to seeing the 2 millionth engine produced in the future.”